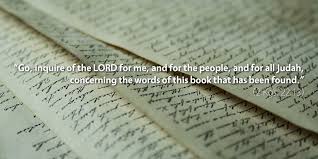 Hezekiah’s son, Manasseh, is the next king of Judah.  And he does not take after his father.  Manasseh built pagan altars in the Lord’s temple and even sacrificed his own son in the fire to Molek – a pagan practice to a foreign false god.  Judah did more evil under Manasseh than the nations that were removed from the land before God established Judah (2 Kings 21:9).  God is not pleased and he foretells a coming “cleansing” of the land: “I will wipe out Jerusalem as one wipes a dish, wiping it and turning it upside down. I will …give them into the the hands of enemies.” (2 Kings 21:13,14).

Manasseh’s son, Amon, is the next wicked ruler.  He is assassinated.  His assassinators are then assassinated and his 8 year old son, Josiah, is given the crown.  It seems a certain recipe for disaster – civil unrest, kingly assassinations, violence, the son and grandson of some of the worst kings is handed the kingship at the age of 8.  However, somehow, with all these strikes against him, Josiah rises above his past and current circumstances.  It appears he has the benefit of some godly advisors, for we learn, “he did what was right in the eyes of the Lord… not turning aside to the right or to the left.” (2 Kings 22:2).  Eighteen years into his reign he commissions the cleaning of the temple.  A most valuable treasure is found – the forgotten, neglected, Book of the Law.  When it is read to Josiah he tears his robes, humbles himself and seeks the Lord for he sees how far the people had strayed from God’s will as well as realizing that punishment was getting closer.  Josiah leaps to action.  He calls together all of Judah and reads the holy words to them.  He calls for the people to repent and renew their covenant to the Almighty.  He jumps into action, purging Judah of idolatry and replacing it with the worship of the One True God.

Without God’s Word the people perish – both then and now.  In many communities and lives today God’s Word is forgotten, neglected, absent, dusty.  People are busy serving themselves and false gods.  They will be caught completely unprepared for the “cleansing” that will come.  How can you respond like Josiah?  After reading God’s words – who will you share them with?  How will you jump into action seeking to purge idolatry (in your own life first) and to then replace it with sincere and pleasing  worship of God Almighty?