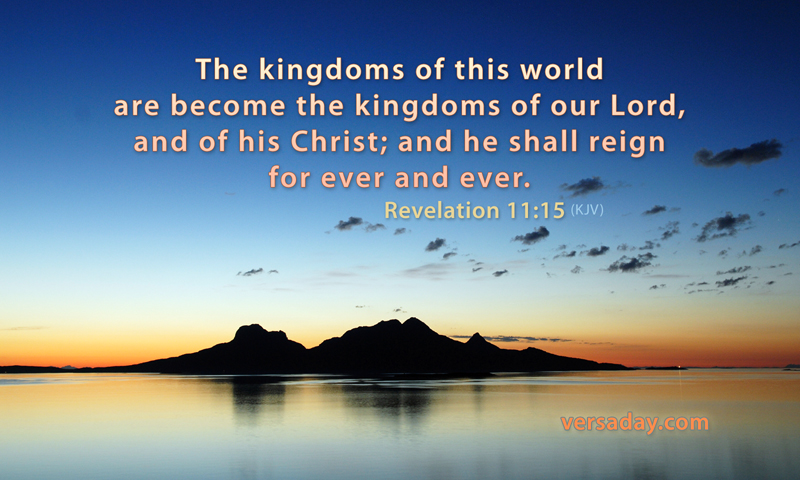 Seven is the number of completion, of fulfillment.  The number seven appears repeatedly in Revelation:  seven Churches, seven seals…. and now seven trumpets.  A trumpet is blown to get people’s attention- something important is about to be announced.  The seven trumpets here announce the judgment of God upon the earth.  God is about to bring this evil age to a close to make way for the age to come, when the Kingdom of God replaces fully the kingdoms of this world.
Each of the seven trumpets are blown by an angel of God followed by some great disaster.  There is hail, fire, blood, large burning rocks falling from heaven (a meteor or asteroid).  Then stars fall from heaven, the sky becomes filled with darkness, more heavenly bodies fall to earth opening deep pits in the earth which release demonic creatures.  There are plagues and wars and all manner of destruction heaped upon the earth.  Here it’s important to remember that much of this is symbolic language.  The point is that there will be calamities which bring about destruction on the earth, some are ecological, some are interstellar, and some are man made.  This Summer there’s a t.v. show on called Salvation.  The premise of the show is that NEO object is heading toward earth and is likely to cause massive death or even total extinction.  In real life, under Yellowstone National Park in Wyoming there is a super volcano, which, if it erupts, would place nearly all of the continental US under a cloud of darkness that would result in massive famine.  Of course, we hear regularly dire predictions about global warming, rising sea levels, the melting of the Arctic permafrost etc…  And don’t forget the expanding nuclear arsenals of places like North Korea and Iran.  There are any number of ways that global destruction could occur.  This is a part of our human consciousness… and it was a part of human consciousness in the first century as well.  There has always been the understanding that there is much that is outside the limits of human control: drought and famine, earthquakes and fire from heaven.  These events were usually linked to belief that whatever gods that community worshipped were angry.  Destruction was linked to judgment, which was linked to human sin.  The normal response was to bring sacrifices to the gods and a promise to stop doing bad things.
In this section of Revelation, we see that the one true God is behind these disasters, but there is no willingness of the people to repent. In Rev. 9:20-21 the people refuse to repent of their idolatry, of their murder, of their sexual immorality.  The people will not link the calamities that befall them and the earth with their own bad actions that violate God’s word.
Revelation 12 gives another picture. It’s an overview of the history of the earth and it shows the cosmic dimension of the battle that’s taking place.  There is a spiritual warfare. Behind it all is this picture of evil described as the dragon, or the ancient serpent, or the devil or Satan.  Evil is making war on God’s people.  Yet, evil will be brought down and God’s people who refuse to submit to evil will be victorious.  Even though they may be killed by evil, yet will they ultimately be victorious.
Remember, when John received this vision, Christians were suffering at the hands of the powerful evil empire of Rome.  It seemed like a powerful or insurmountable monster that was able to impose his will on God’s people.  Imagine how hard it would have been to stay faithful to Jesus Christ during such a difficult time.  Yet here is a message of hope, a message of victory.  Evil and the human faces of evil will not win.  God has far more power available to him than evil does.  Those whose hearts are turned against God and refuse to repent will not be swayed by these displays of judgment and power, but those who are faithful to Jesus Christ and remain faithful, even to the point of death, will emerge victorious.
There are always events that happen in our lives that tempt us to doubt God or to turn away from Him.  These apocalyptic texts in Revelation serve as a vivid reminder that, no matter how bad things may get in the world, even for believers in God, God will be victorious.  Let us stay faithful and keep trusting God and our faith will not be disappointed.