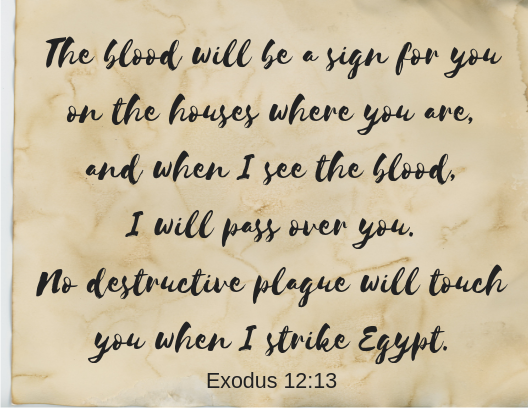 I had touched very briefly yesterday on the plague of the firstborn and the passover ceremony which spared the lives of those who followed God.  Let’s look at that a bit more today.

To prepare the Israelites for the passover they were to have each family take a lamb and slaughter it at twilight and take some of the  blood and put it on the doorframes of their houses and then cook and eat the lamb that night with bitter herbs. They were to also take care of the lamp for a week before they slaughtered it.  This would not be an easy thing to do and the meal would not taste good. This was meant to show the pain and sorrow that sin causes and the blood that is required to wash away sin.

Slaughtering the lamb in Egypt would also have taken a lot of faith.  Animals were of great value back then, which is why so many of the Egyptians worshiped them, and most likely many of the Israelites did as well.   Animals were of even greater value as well because of all the plagues that had just wiped out the animals in Egypt. Earlier we had seen that they could not do any sacrifices in the land of Egypt because the Egyptians detested it.  Now they are doing just that. In order to do this the Israelites are sacrificing their material wealth, as well as turning their backs on the Egyptian gods. If they were not able to let go of the wealth or culture then they would have faced the judgment.  He goes on to say,

12 “On that same night I will pass through Egypt and strike down every firstborn of both people and animals, and I will bring judgment on all the gods of Egypt. I am the Lord. 13 The blood will be a sign for you on the houses where you are, and when I see the blood, I will pass over you. No destructive plague will touch you when I strike Egypt.

14 “This is a day you are to commemorate; for the generations to come you shall celebrate it as a festival to the Lord—a lasting ordinance.

The plague of the firstborn was to be the final blow to the Egyptian culture/gods, and with it God is also implementing a lasting holy day in their culture by which they will remember what God has done for them for all generations, and the seder passover dinner is practiced around the world to this day.  The problem with the Israelites in Egypt was that they forgot what God had promised them. God was not going to let them forget again so easily.

In the Old Testament there were many festivals and holy days and cultural things that God implemented in the Israelites in order to remind them of his work and power in their past.  Even with these they often forgot and wandered away from God. After Jesus we do not live under these laws and we do not have to follow these feasts and rituals, but we still need to make a permanent change in our lives every time that God acts in our lives.  We need to constantly remind ourselves of what God has done for us. The passover ceremony was designed to make people ask why they would do such a thing so that the Israelites could tell people the story of the Exodus. Similarly our stories of how God has changed our lives are our most powerful tool for spreading the Gospel.