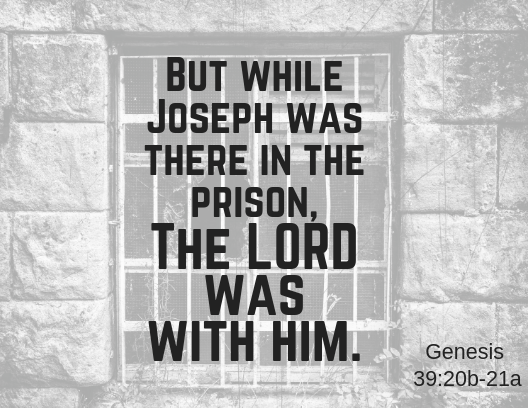 In the beginning of Genesis 39, Joseph has just been sold to a new master named Potiphar.  During the course of the chapter, Joseph is falsely accused and thrown into prison.  The chapter ends as Joseph goes from being a slave to being a prisoner.  Sounds pretty bad, right?  Strangely enough, the chapter starts out by saying of Joseph the slave, “The Lord was with Joseph so that he prospered, and he lived in the house of his Egyptian master.”  The chapter ends by saying of Joseph the prisoner, “The warden paid no attention to anything under Joseph’s care, because the Lord was with Joseph and gave him success in whatever he did.”  So God was with Joseph and gave him success and prosperity even as a slave and a prisoner.  Sounds very strange to me.  It would seem to me that success would be not being a slave and not being a prisoner.  But Joseph understood some things that many of us never understand.

We can learn a lot of good things from Joseph.  Whatever happened in his life, he kept on trying to live for God.  He continued to have a good attitude and he continued to work hard.  He didn’t pout, become discouraged, depressed or cry out, “Why me?”

How about you?  When you go through tough times, do you continue to seek God and discover His will?  Do you try to keep a positive attitude?  Would you keep working hard if you were in Joseph’s shoes?  We will soon see how God’s plan unfolded in Joseph’s life.  Feel free to read ahead in the Bible on this story of Joseph.  It is way more interesting than a TV show.