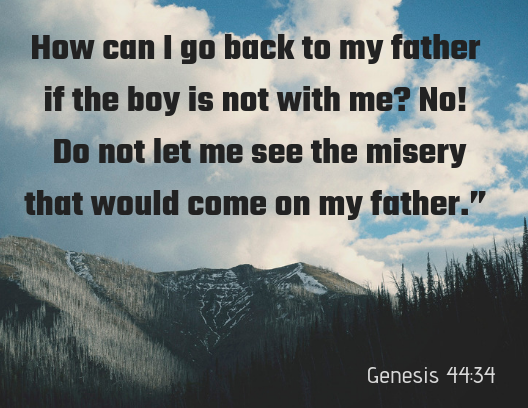 Joseph, from the Old Testament, was a very godly man.  He endured many hardships, but held onto his faith. But along the way, he picked up some bitterness and resentment toward his brothers.  When he had the chance, he tormented them, exacting some measure of revenge.  At that time there was such severe famine that Joseph’s brothers were forced to go back to Joseph a second time and buy grain.  This time, Joseph started by being kind to his brothers, and then he veered off, continuing to emotionally torment them.

In Genesis 44, everything finally came to a head.  Joseph deceived his brothers further, and made it appear that he was going to force the youngest brother, Benjamin, to stay there with Joseph in Egypt.  This plan may have seemed like another fine way to punish his brothers, but there was a huge problem.  His brother Judah approached Joseph, and said, “If you keep the boy Benjamin here, our elderly father will die from sorrow.”  Perhaps Joseph hadn’t considered the pain he was about to cause his own father–or the pain he had already caused him.  At this point, Joseph just about had an emotional breakdown (read it for yourself in Genesis 45).  All along Joseph had been trying to hurt his brothers, but he was the one who was hurt the most.  The pain he wished for them turned out to be the pain he felt.