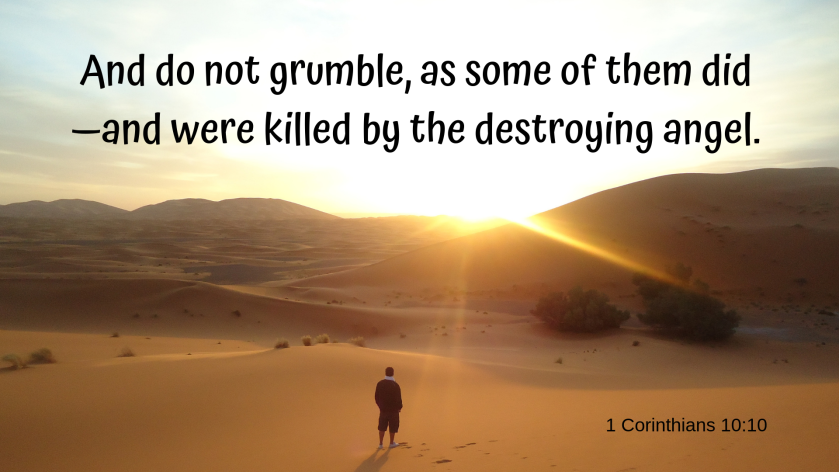 Even though chapter 10 of 1 Corinthians is titled by Bible editors as ‘Warnings from Israel’s History’, I still didn’t expect the likes of this:

We should not test the Lord, as some of them did – and were killed by snakes. (verse 9)

But let’s take a minute here, what does that mean—don’t test the Lord?  In Malachi 3:10 God invites the people to test him and see if He’s faithful in what He’s promised.  Must be a different kind of testing.

What Paul is referring to here is recorded in Numbers 21:4-6.  The events took place while the Israelites were wandering in the desert.  We’re told that the people grew impatient and complained.

So, like any good parent, God sent snakes.  hahaha   Seriously, though, he got their attention and the rest of the people repented.  Definitely good parenting.

Paul gives another example of the kind of testing that we’re not to do when he goes on to say,

And do not grumble, as some of them did – and were killed by the destroying angel. (verse 10)

Paul goes on to tell us why he’s bringing these examples up:

The people of Israel had seen far larger acts of God than most of us can claim.  They had walked through a sea and eaten bread that appeared spontaneously.  And yet they questioned God’s care for them.  We can look at that and shake our heads at how fickle they were.  But how different are we?

Because we don’t have a map of the future, it can be frustrating to not see things lining up or happening as we think they should.  It can also become easy to question God’s care for us.

Please remember today that God is big enough to handle our questions.  He invites us to test Him so we can be assured of His faithfulness.  But be intentional to catch yourself if you start to feel that God owes you something and is not coming through the way that He ought.