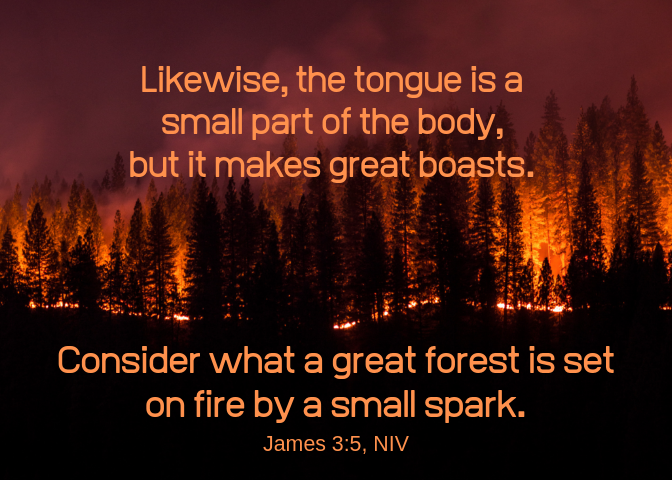 Have you ever heard young boys arguing? It may begin as an argument about which is faster but many times it will end up with the two boys shouting something to the effect of, “My dad is stronger than your dad!” Often times we see our fathers as a symbol of strength, but what does strength look like? Is it a bodybuilder with bulging muscles? Is it a sprinter with unbelievable speed? These can be measures of physical strength but the strength that we are called to display is more than just strength of body.

The world tells us that a strong person should “get mad and fight like a man” God tells us through James to control our speech and even to control our anger. In chapter one he said, “Be quick to hear, slow to speak, and slow to become angry”. James 1:26 tells us “If anyone thinks himself to be religious, and yet does not bridle his tongue but deceives his own heart, this man’s religion is worthless” In Chapter 3 he says that anyone who does not stumble in what he says is a perfect man, I can tell you I am far from perfect. He goes on to explain how such a small part of our bodies can control and lead so much of our life. When I take a flight I often sit near the wing and will watch the flaps as the pilot makes adjustments to control the aircraft. It always amazes me to see that such a small change, in a relatively small piece of the plane, can determine the altitude of such a massive machine as it carries me through the air at hundreds of miles per hour. James 3:5-8 says

5 So also the tongue is a small part of the body, and yet it boasts of great things. See how great a forest is set aflame by such a small fire! 6 And the tongue is a fire, the very world of iniquity; the tongue is set among our members as that which defiles the entire body, and sets on fire the course of our life, and is set on fire by hell. 7 For every species of beasts and birds, of reptiles and creatures of the sea, is tamed and has been tamed by the human race. 8 But no one can tame the tongue; it is a restless evil and full of deadly poison.

Although the tongue is such a small part of our body it is what we use to express our thoughts and emotions to those around us. Jesus even said that our words are the overflow of our heart. Does that mean when we are sarcastic and disrespectful to those around us that is what is truly in our heart? That can be a disturbing thought sometimes. Perhaps we should use our words to view the contents of our heart.

When I lived in the South I would hear someone say something inappropriate and another person would ask, (insert your best southern accent) “You kiss yo momma with that mouth?” James says something similar but with even more force. He says, “With it we bless our Lord and Father; and with it we curse men, … these things ought not to be this way.” We should seek to honor both God and people with our words.

We should be consistent with our thoughts and actions.

We should be consistent in the strength of self-control.

It takes true strength to control your tongue.

Show strength that builds up, not tears down!