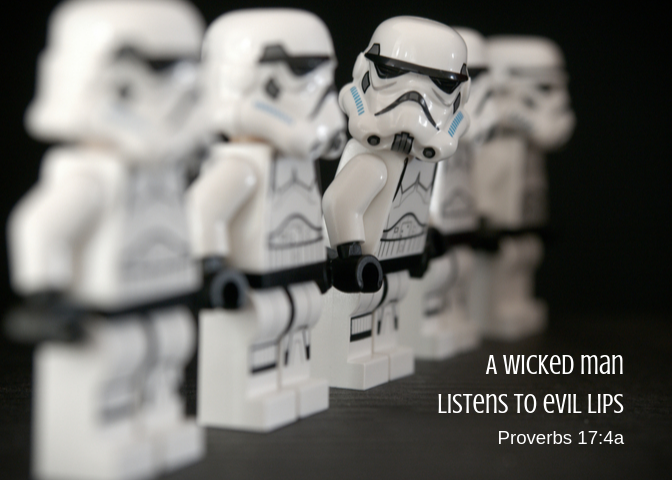 Everyone is handsomely dressed and well coiffed. They laugh in each other’s company as they head down the long corridor to the banquet hall where they’ve been invited to a grand dinner. The door slides open and Darth Vader greets his “guests.” Suddenly, Han, Leia, Chewy, and C-3PO realize this was a trap, and they were caught.
For anyone who has not seen Star Wars Episodes 4, 5, and 6 (about 216 times), Darth Vader is the villainous overlord of an oppressive and evil empire. Han, Leia, Chewy, and C-3PO, along with Luke and R2-D2, are the good guys trying to do what’s right and rebel against the regime.
When I read Proverbs 17: 1 (Better is a dry morsel and quietness with it, than a house full of feasting with strife), this scene from Star Wars: Empire Strikes Back immediately comes to my mind (Quite a few other verses bring this scene to mind too… Psalms 23:5 for example). I am certain the Rebel crew would have much preferred some blue milk and tauntaun jerky than a feast with their mortal enemy!
Star Wars is a science fiction epic that has endured for over 40 years in part because, even though it took place “a long time ago in a galaxy far, far away,” it is the classic story of good versus evil.   In Episodes 4, 5, and most of 6, Darth is the personification of evil. Proverbs 17: 5, 13, 15, 19, and 20 describe his actions well. He is angry, murderous, destructive…. like blowing up entire planets destructive!
But he didn’t start out that way. He started as a boy named Anakin. (As a nearly life long Star Wars fan, I know Episodes 1, 2, and 3 are almost worthless for so many reasons, but for the sake of argument, please just go with it.) We learn that he was whiny, self absorbed, impulsive, rebellious, but most importantly, fearful. Theses attributes made him ripe for Palipatine, an evil leader with nefarious intentions, to convince Anakin to listen to evil lips (verse 4) and exchange a promise of power for evil deeds (verse 23).
Even though this is just a movie series, it truly speaks to the fact that evil starts somewhere and it’s usually rooted in selfishness and fear. And in the real world, those emotions are rooted in the absence of faith in God through Christ.
Spoiler Alert: Fortunately for Darth, he does see the light side of the force and repents for all he’s done shortly before his death. Great deathbed conversion scene! But we don’t have to have our world, or Death Star, crumble around us before seeing the error of our ways. Seek knowledge now, practice wisdom now, love now (verse 17).
May the word of God be with you.
Maria Knowlton