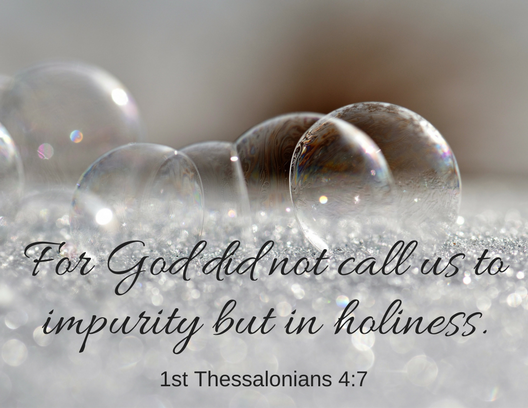 1Thessalonians 4:7 For God did not call us to impurity but in holiness. 8 Therefore whoever rejects this rejects not human authority but God, who also gives his Holy Spirit to you.

In looking at how to live a holy life, how to make moral decisions, we have looked at three things. Two are external to us — what have we been taught and how are we treating another person. The second was internal, i.e., what is best for me? The last is also internal, and perhaps the most amazing: what is the Spirit of God saying within me?

The most amazing teaching about our new life in Christ is that the Spirit of God is actually within us. Jesus is within us through the presence of the Spirit. As Paul writes, “Christ in you, the hope of glory” (Colossians 1:27). It’s staggering to think that we bring Jesus into our immoral actions, but can it give us hope that he is present in us and will give us the strength to do his will?

How do we live a holy life? Are we willing to ask, what does Jesus, who lives within me through the Holy Spirit, say to me? 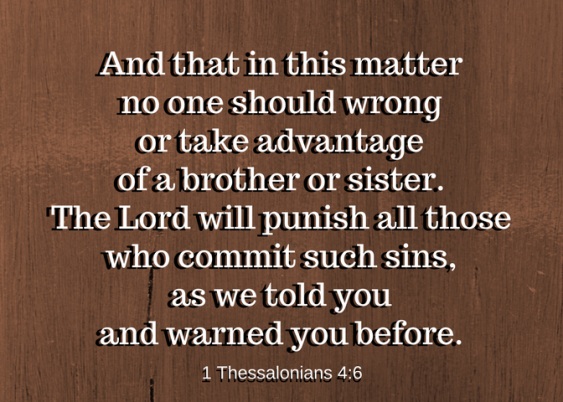 1Th. 4:6 that no one wrong or exploit a brother or sister in this matter, because the Lord is an avenger in all these things, just as we have already told you beforehand and solemnly warned you.

We noted that Paul’s first instruction on morality was external, the second internal, i.e., what were you taught, then what is good for you. This third guideline for moral behavior is again outside of us, i.e., how am I treating the other person?

When I first went into youth ministry, almost 40 years ago, a study asked young people why they first had sex. The number one reason for girls was love, for guys was curiosity. The only thing that has changed over the years is that now the girls also are acting out of curiosity. As Bob Seger sang in the classic rock hit, Night Moves, “I used her, she used me, neither one cared. We were getting our share.”

As Christians, can we use another person for our personal sexual gratification? What impact does our action have on the other person?

Sometimes I think this is a special issue for Christians. Maybe worldly people can see former sexual partners as just passing acquaintances with whom they had a good time, but can it be that simplistic for Christians? Don’t we as Christians think of sex as more than a good time? It is a gift that God has given us to share with our life partner. We might think our romance is going to lead to marriage, but what if it doesn’t?

What does it mean to respect others in regard to our moral decisions? 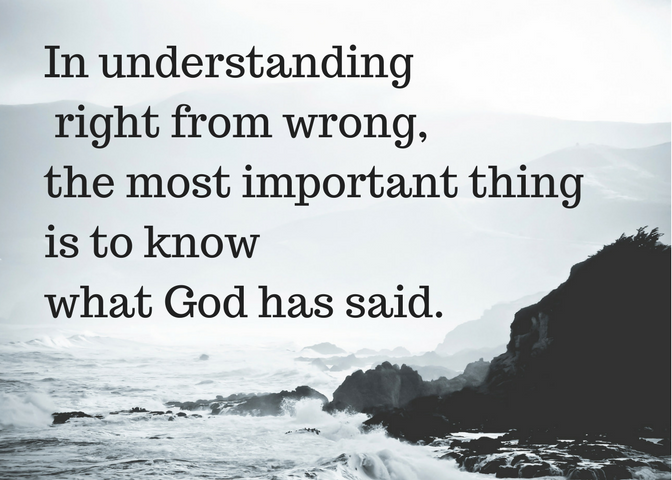 1Th. 4:1   Finally, brothers and sisters, we ask and urge you in the Lord Jesus that, as you learned from us how you ought to live and to please God (as, in fact, you are doing), you should do so more and more. 2 For you know what instructions we gave you through the Lord Jesus. 3 For this is the will of God, your sanctification: that you abstain from fornication;

The church at Thessaloniki was made up of mostly non-Jews, so Paul knew that it was important to teach them about sexual purity, because that was not something that was expected in their society. As Demosthenes wrote:

“We keep mistresses for pleasure, concubines for our day-to-day bodily needs, but we have wives to produce legitimate children and serve as trustworthy guardians of our homes.”

This attitude was not acceptable to God’s people. In Acts 15, when the leaders of the Jerusalem church welcomed the Gentile Christians into the body, they thought it important to remind them to abstain from fornication (Acts 15:29).

We live in such a world today. How do we make moral decisions? As we continue in this chapter we will see three more important points, but Paul begins with what we have been taught. In understanding right from wrong, the most important thing is to know what God has said. Paul writes that they have been taught to abstain from fornication, meaning every type of sexual sin.