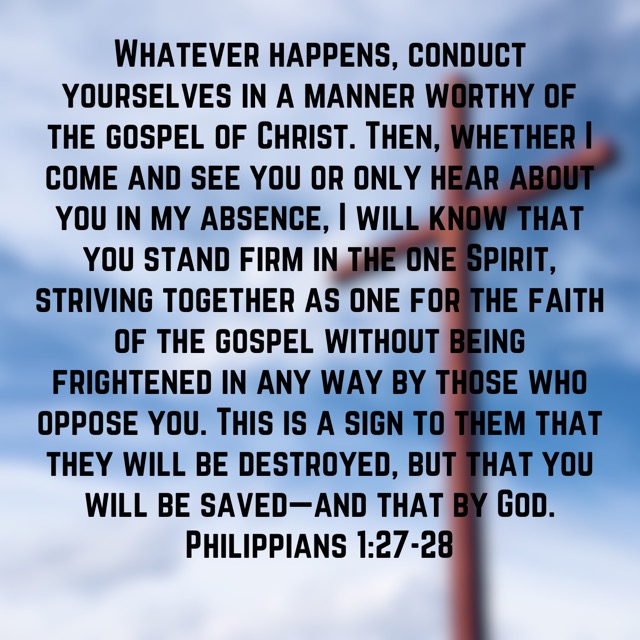 One of the main reasons Paul decided to write a letter to the church at Philippi was to encourage unity among them. If they achieved this unity, it would make his joy complete (Phil. 2:2). But for what purpose did Paul want them to be unified? What is the common idea around which their unity was to be based? The answer to this question is found in chapter 1.

Paul had a singular focus in life: to preach the Gospel (good news) to the world. In particular, he wanted to spread it beyond the Jewish people to the Gentiles. In Philippians 1 Paul mentions the persecution he had faced in his life. While he doesn’t go into detail, we know from other sections of the New Testament that Paul suffered greatly. He was thrown into prison multiple times, he was shipwrecked, and, among other things, he was beaten. Despite this suffering, Paul says in verse 12 “…that what has happened to me has actually helped to spread the gospel.” Paul also heard of people who were preaching the gospel out of “envy and rivalry.” Despite these selfish motives, the important thing to Paul was that Christ (the central figure of the Gospel) was being preached. Paul was able to rejoice because his focus was on Christ and the Gospel—even when the situation wasn’t always…pleasant.

And this brings us to Paul’s purpose in imploring the Philippians towards unity.

“Whatever happens, conduct yourselves in a manner worthy of the gospel of Christ. Then, whether I come and see you or only hear about you in my absence, I will know that you stand firm in the one Spirit, striving together as one for the faith of the gospel without being frightened in any way by those who oppose you. This is a sign to them that they will be destroyed, but that you will be saved—and that by God.”

Paul wanted the church to be unified in their desire to further the Gospel. This meant conducting themselves in a manner worthy of the Gospel—no matter what happened. If everyone in the Church would start doing this one thing, then they would be striving together as one for the faith of the gospel; they would be unified. No outside force could intimidate them and throw them off course, and no disputes from within could form to distract from their common purpose. This would make Paul’s joy complete.