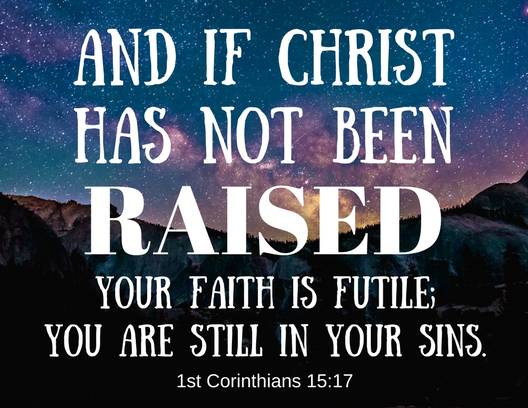 The next section of I Corinthians 15 we’ll look at are verses twelve through nineteen. In this section, Paul traces the implications of the claim that there is no resurrection. In verse twelve Paul asks “…how do some among you say that there is no resurrection from the dead?”. We’re not told anything about who these people are. They either could be outsiders that are influencing the church or it could be people part of the Corinthian church. Either way a group is claiming that resurrection is not a reality. This is not the first time Paul has interacted with the belief that resurrection does not exist. In Acts 17.32, the response to his preaching, that climaxed with the claim that God has made himself known through the risen Jesus, elicited a mixed response. Some believed and followed others sneered at the idea of resurrection.

Beginning in verse thirteen Paul sheds light on a world with no resurrection. To begin with first and foremost, if there is no resurrection then Christ himself has not been raised! And if Jesus hasn’t been raised then Paul’s preaching and the recipient’s faith is in vain! In other words, whether resurrection, specifically Jesus’ resurrection, is true or not, has a direct impact on how we live our lives and the manner in which we live them. Paul rebuilt his life around the risen Jesus and lived in such a manner, the recipients of Paul’s preaching reorganized their lives in light of the risen Lord. But if Jesus has not been raised, if resurrection is not possible, then we have to find something else to build our lives upon. This is why the resurrection of Jesus is the most important event in history. Everything hangs on it! It affects how we live and what we believe. He continues that if Christ has not been raised then it makes him a liar and God a liar because he falsely testifies that God raised him from the dead. In addition, our faith in Jesus is worthless and we still remain in our sins. Verse nineteen culminates with if we hope in Jesus in this life only, then we are the sorriest and most pitiful people there are. A hope in a non risen savior is no hope at all, it’s a delusion and a fraud.

The implications of no resurrection are bleak and grim, but Paul says in the next verse, “but now Christ has been raised from the dead…”. The reality described in verses 12-19 is not a reality because Jesus has been raised from the dead and resurrection is a reality. However, how can we have assurance or confidence that Jesus really did rise from the dead? This was an event that happened nearly two thousand years ago. I want to share some points that can help aid our belief in the resurrection. Our faith is not validated in what we can know intellectually alone but also we’re not supposed to check our brains at the door and just believe blindly or with no reason. Some reasons to have confidence in the resurrection are: