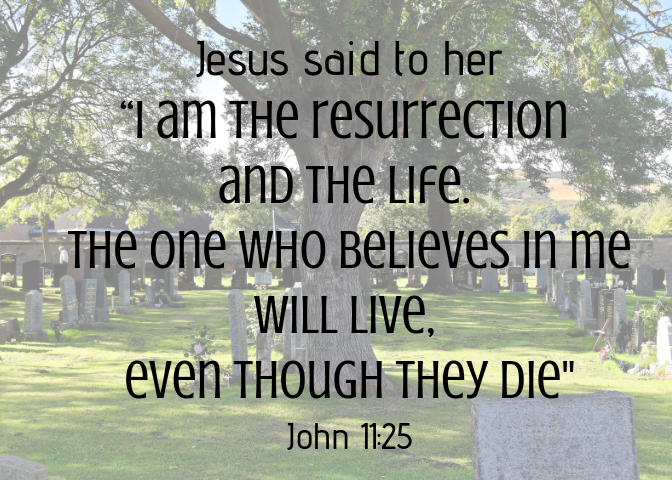 In John 11, Jesus received word that his dear friend was very sick, and yet Jesus stayed where he was for two more days before heading to Bethany, where Lazarus was.  When he finally got there, Lazarus had been dead for four days.

Martha, Lazarus’ sister came out to meet with Jesus, and we have a record of their incredible conversation.

21 “Lord,” Martha said to Jesus, “if you had been here, my brother would not have died. 22 But I know that even now God will give you whatever you ask.”

23 Jesus said to her, “Your brother will rise again.”

24 Martha answered, “I know he will rise again in the resurrection at the last day.”

25 Jesus said to her, “I am the resurrection and the life. The one who believes in me will live, even though they die; 26 and whoever lives by believing in me will never die. Do you believe this?”

I love these incredible statements of faith:  If Jesus had only been there, he could have healed Lazarus.  Even now, God would give Jesus anything Jesus asked.  “I know he will rise again in the resurrection at the last day.”  “I believe you are the Messiah, the Son of God.”

No wonder Jesus loved this family.  They were devout followers of Christ with amazing faith.

You know the rest of the story.  Jesus told them to roll away the stone.  Martha said basically, “he’s going to stink, he’s been dead four days.”

40 Then Jesus said, “Did I not tell you that if you believe, you will see the glory of God?”

Then Jesus called in a loud voice, “Lazarus, come out.”  And the dead man came out!

Many people believed in Jesus because of this miracle.  But not everyone believed. The Pharisees’ response was, “If we let him go on like this, everyone will believe in him…” and they plotted to kill him.

How is it possible to have such diametrically opposed reactions?  Unfortunately, we see a similar range of reactions to Jesus today, from faithful devotion to hostility.

I don’t know about you, but I want to have the same reaction Martha demonstrated.  And I’m staking my life on verses 25 and 26.  I want to encourage you – do the same.  And I’ll look forward to seeing you at the last day.