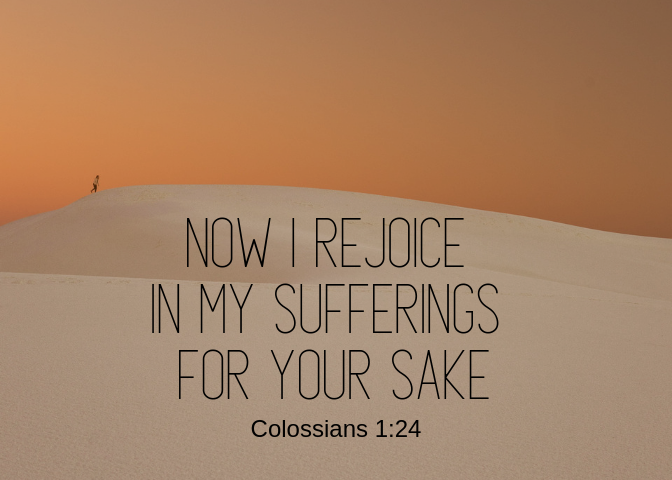 I like to listen to audio books. Most of the books I read could be considered “self-help” or “Leadership” books. The one that I have just started in the last couple days is called “Can’t Hurt Me” by David Goggins. David is a former Navy seal and an ultra-athlete. The premise of his book is to have a mentally tough and disciplined mind that allows us to push through the worst experience’s life can throw at us. This idea of “Can’t Hurt Me” reminds me of what Paul said in Colossians 1:24-29

“Now I rejoice in my sufferings for your sake, and in my flesh,  I do my share on behalf of His body, which is the church, in filling up what is lacking in Christ’s afflictions. Of this church I was made a minister according to the stewardship from God bestowed on me for your benefit, so that I might fully carry out the preaching of the word of God, that is, the mystery which has been hidden from the past ages and generations, but has now been manifested to His saints, to whom God willed to make known what is the riches of the glory of this mystery among the Gentiles, which is Christ in you, the hope of glory. We proclaim Him, admonishing every man and teaching every man with all wisdom, so that we may present every man complete in Christ. For this purpose, also I labor striving according to His power, which mightily works within me.

Here we see Paul bringing up a time where he had been persecuted for bringing the Gospel to the Colossians. Where he endured hardship while preaching fully the Gospel to them. He mentions in verse 27 “God willed to make known the riches of the glory” and also mentions “hope of glory”. I believe that this for Paul was meaning no matter what kind of tribulations, trials, or persecution he goes through Jesus also went through this, and God revealed the mystery of resurrection power to the world as well as the Gospel through Christ.

We will have days, often, that are going to be horrible from our perspective. Now I don’t know what David Goggin’s believes personally. However, if we adopt what I think David Goggin’s and Paul would say is a “Can’t Hurt Me” mindset, we can look forward to the resurrection and the kingdom of God.