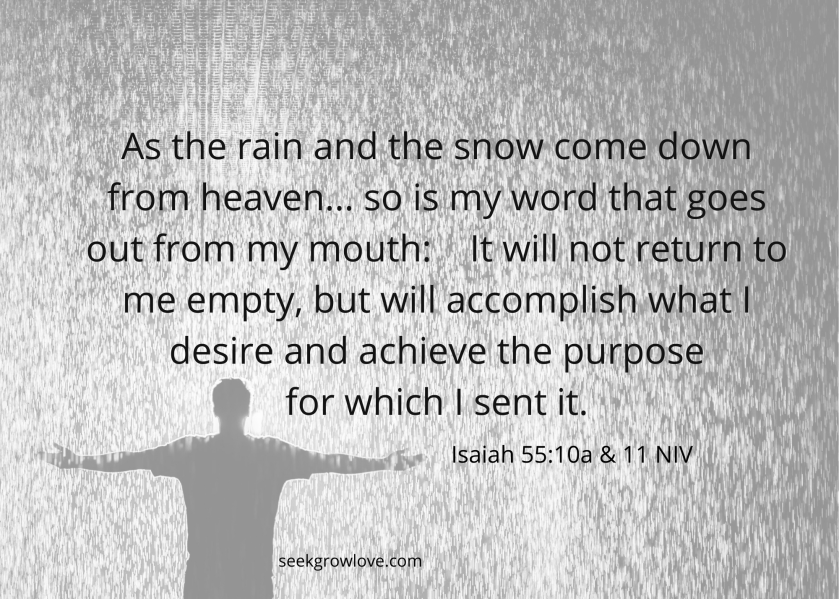 There is an endless cycle of the outpouring of God’s word followed by Man’s obedience and satisfaction before Man disobeys and becomes dissatisfied. This can manifest itself over the course of generations, as is the case in the story of Noah. God is with Man in the Garden and Man knows God. Man is obedient but his obedience quickly turns to disobedience. Once God decides it is time to pour out His Word, He speaks to Noah and Noah listens. Then the cycle repeats. We see an obedient generation in the early kingdom of Israel under David which becomes disobedient in a matter of generations. The cycle can also be seen in the life of individuals. I was fed the Word from the time I was an infant; I grew up with it and accepted it. Then I became disobedient as I became a teen only to see God’s word in a whole new light and to be brought back to obedience and satisfaction in God. In fact, I have seen this cycle no less than three times in my own life. The cycle can be a minor affair, not having to represent a complete falling out with God but instead moments of spiritual hunger and moments of spiritual contentment.

Isaiah 55:8-11 is a wonderful metaphor for this cycle. We see that God’s word is like the rain, for it exists for a purpose; it exists to nurture the earth and to bear fruit. At times the rain can come as a veritable monsoon, as in the days of the early church when men were prophesying and speaking in tongues and the church was spreading like wildfire. It can come and it can go without warning, bringing with it the full force of a thunderstorm, forcing everyone to watch in awe. It can also come gently in the night and no one will hear it.

Droughts can stretch on seemingly endlessly, but survival is still made possible by the preparations that we make during the rainy season. We store up food for ourselves so that we won’t go hungry. Droughts are tough. Some people don’t survive. Some are victims of their own inaction, unable to survive because they didn’t reap a harvest while it was available to them. Yet still others seem to be innocent, faithful in the harvest and responsible in the draught, but they fall victim to it nevertheless. It is possible that there was water nearby and all they had to do was search for it. Sometimes it requires the wisdom to move on from a place to survive a draught. After all, there is a reason that not many people live in the desert.  The draught is difficult to overcome but one thing is certain: the rain will come again.

Today’s Bible reading passage can be read or listened to at https://www.biblegateway.com/passage/?search=Isaiah+54-58&version=NIV