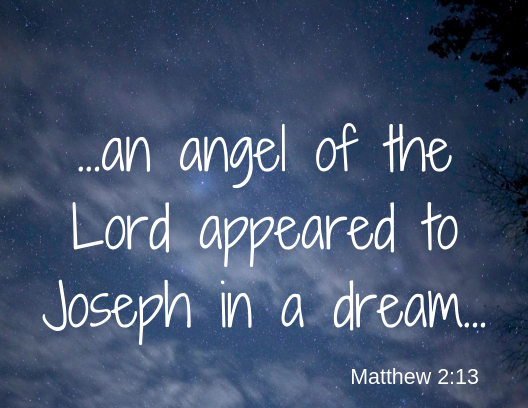 In the Bible, there is be a great deal of naming done for the sake of conveying a purpose or message.  It could tell the story of a birth (Samuel: God has Heard), a unique physical trait (Esau: Covered- with hair), to make a theological point (Abraham: Father of Many), or a prophecy (Yeshua: Saving One); nonetheless, these men and women (Ruth; Companion) are born-to or given to testify of the the glorious God we serve.

In the first two chapters of Matthew, a name that appears in equal amounts to the name of Jesus is Joseph.  As discussed yesterday, Matthew 1 is the genealogy of the line of Joseph, but equally important to note is Joseph’s role in the early part of Christ’s story – the announcement, advent, and escape.  This man entrusted with the care of Jesus was named, whether coincidentally or purposefully, for his famous great (great, great, great…) uncle Joseph, who was the famous dreamer and interpreter. It is then fitting that Joseph is given the word of God, not by messengers or a family member as we see with Mary (Luke 1), but in a dream.

Between Matthew 1:18 and Matthew 2:23, or a span of a couple of years, Joseph is recorded as spoken to by God in a dream on four different occasions. He is told not to be afraid to take Mary as a wife (1:20), move to Egypt (2:13), move to Israel (2:19-20), and finally, specific guidance to stay away from Judea, and go to Nazareth (2:22). Joseph, who may have initially been filled with doubt, becomes incredibly faithful to the will of God.  Just like his liked-name predecessor, He goes hither and yon to follow the will of God. At times, he looks incredibly foolish. He goes from the comforts of home to the foreign land of Egypt, yet ultimately, he brings glory to his father, for OT Joseph, Jacob, and for NT Joseph, YHWH.  In so doing this, he lives up to his name – not Joseph – but the one carried by his Son he so carefully protected.

While our name is not Joseph, (well, most of us), each one of us also have a calling on our name too (Rom 8:28).  We are not all named for the same reason – some have the name of a biblical figure (like me), and others are named for a special relative, and even a few are named for a Fleetwood Mac song, but God has purposed and fashioned us all (Psalm 139:13-17) to be faithful to him.  Joseph played his part in making sure there is one name that supersedes them all. We might seem foolish to some, we may be called to go hither and yon, leaving behind the comforts of this life, but ultimately we are bringing glory, not to our name, but to our Father in heaven. Does it matter what others call us? Or even what we think of ourselves? In the words of Shakespeare, “What’s in a name? A rose by any other name would smell as sweet.” How much more does your Father in heaven know this? He has a plan for you. He wants a relationship with you, and truly, it began long before you were ever named. No matter the expectation, or lack thereof, attached to our name, there is truly only one name that matters under heaven: The name of Jesus Christ (Acts 4:10-12) because it is the only name by which we are saved. Like Joseph, it is now our time to play our part, hold onto Jesus, and carry the Son wherever we’re called to go.

Aaron Winner is a worship leader and a middle school teacher in Upstate South Carolina.  He has been married to his wife Jennifer for 13 years today – yay!  Aaron is also a songwriter, currently working on his fourth album, “Wonderful”.  Additionally, he hosts his own blog at elattruthfillintheblank.weebly.com, which combines thoughts from his work at school and church; however, he is happy to write for us this week at the start of our 2019 Bible study!