Hebrews 4:15-16 For we do not have a high priest who is unable to empathize with our weaknesses, but we have one who has been tempted in every way, just as we are—yet he did not sin. Let us then approach God’s throne of grace with confidence, so that we may receive mercy and find grace to help us in our time of need.

If empathy can be summed up as “feeling with people,” as Brene Brown put it on Monday, then Christ and his life represent the ultimate act of empathy.

In each of our lives, we have all fallen short.  It’s an unfortunate fact of existence.  We are all going to mess it up and be messed up.  And it’s not just us – all of life and creation feels the effects of the broken world we live in.

Yet the world and life is still good and we give God praise for each day.  Why?

It is because we have an intercessor who knows – not just intellectually – deep down in his bones what it means to suffer under the weight of human tragedy.  We have a high priest who has walked through the deepest shadows of despair and born the burden of bodily pain in his own flesh.  And because of him, there is hope.

And it isn’t just a pie-in-the-sky kind of hope either.  It isn’t a hope that only awaits us on some future ethereal plane.  It is a hope that is born out and brought into the midst of this life through the continued work of Christ in the community of faith.  It is hope that is birthed in the acts of empathy that we continue to pursue each and every day.

We can approach not just the throne of grace with confidence, but the altars of pain and brokenness with healing because we can extend the grace that has already been extended to us.

Today, may you receive the grace you need and may you pass along the love that overflows from the heart of Christ. 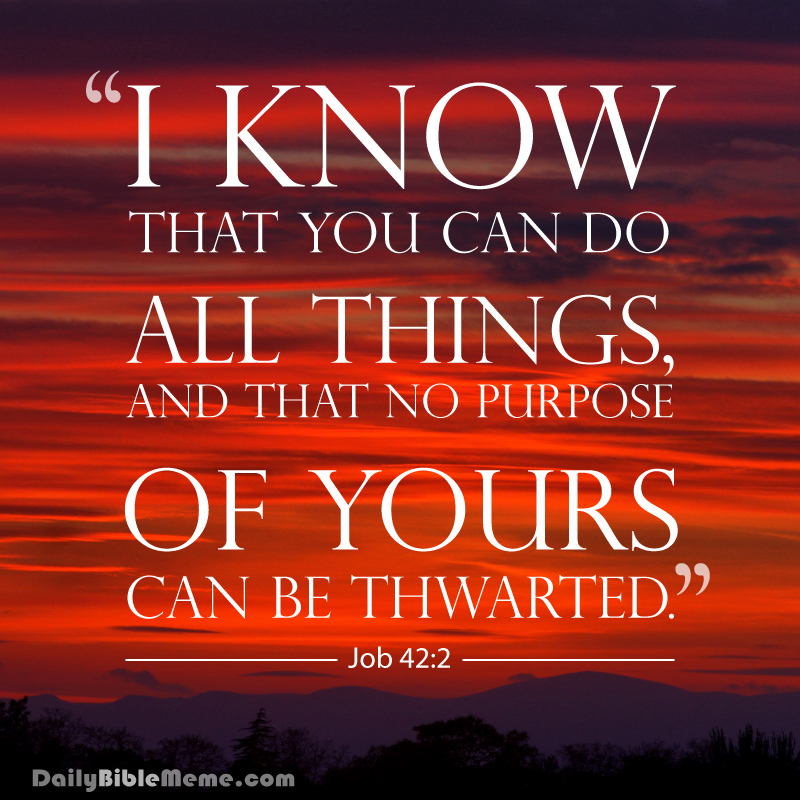 In today’s reading we have the conclusion of God’s rebuttal to Job.  He enumerates the detail of creation, throwing multiple examples at Job about its forethought, workings, and power.  Then, the mic is dropped.

“Surely I spoke of things I did not understand, things too wonderful for me to know.  “You said, ‘Listen now, and I will speak;  I will question you, and you shall answer me.’ My ears had heard of you but now my eyes have seen you. Therefore I despise myself and repent in dust and ashes.” Job 42:3b-6

God gives Job a sobering reminder of who God is.  Through this God does not simply restore Job, but he also uses him to intercede for his friends.  When our prayer lives are focused on others, especially those who have wronged us, we are drawing closer to God.  We love like Him.  We forgive like Him.  We are faithful like Him.  Eliphaz, Bildad, and Zophar had to offer their own sacrifice, they had to pray for themselves, they had to change their ways, they had to make their own decision, but the devotion of a faithful friend saved them from their deserved punishment.

You too, have a friend who is interceding for you (Rom 8:34).  Jesus Christ is pleading your case before God.  You deserve not only death, but destruction, but God has listened to our Savior’s appeal.  You still have great responsibility, but he is making it easier (Matt 11:30).

My challenge for you is to find your own three friends (like Job) to pray for.  When we pray for our friends (and our enemies), acting like Job and Jesus, how much lighter can it make their burden?  What consequence might we save them from?  What healing or saving opportunity will God present them? (James 5:14-16).  Conversely, if we do not, what are we condemning them to?

Chronicles 21-23 continue with various exploits of David and opportunities to see the need for a savior to stand between sinful man and Yahweh. David had earlier gotten into trouble numbering the “strong men” of Israel who were ready for battle. He doesn’t seem to learn the lesson to trust in God and follow His plan. At times David seems ready to be God’s servant and listen before acting, but he can’t let go of the idea that he needs to be in control.

David decides to order a census. On the surface there is no problem, but God required a tax to be paid to the tabernacle or be plagued each time they were counted in order to take time and count their blessings before God. (Ex. 30:12-15) Joab reasoned the people would not want to pay another tax and would be plagued. In chapter 20:3 Joab asks David, “my lord the king are not they all God’s servants? Why become the cause of guilt for Israel?”

Joab did his best to intercede on behalf of Israel, but David would not relent and Israel was plagued. God keeps His word even when it hurts. When David realized what was happening to the people he asked God to forgive him and if you have heard the story before you know God offered David three choices. Three years of famine. Three months under the control of enemies. Or he could choose three days under the sword of Yahweh.

David asks that he fall into the hands of God because he had witnessed that the mercies of God were great. As God’s angel was ready to strike Jerusalem, God relented after hearing all the cries for mercy and ordered David to build an alter at the spot the angel stood. The story that follows is one of my favorites. Ornan and his four sons have seen the angel and are hiding, like that would help. David approaches to ask to buy the land where the threshing floor stands to build an alter for God and Ornan tells David to take the land and oxen for an offering and suggests David use his tools for the wood to start the fire and to use the wheat he has milled for a meal offering. Ornan says, “I give it all.” Talk about being “All In”!

David could have done just that, but he has had an epiphany. He understands that the sin belongs on his shoulder and he wants to pay the price. He tells Ornan in v. 24, “No; but I will certainly buy it for full price. I will not take that which is yours for Yahweh, nor offer a burnt offering without cost.” Forgiveness comes with a cost. Ornan was willing to give it all to protect his sons. David asked that Israel’s sin be counted to him and his family. He trusted God to love and show mercy and always provide a covering for the sins of men. David was so messed up when he acted on his own impulses. When he came face to face with God, I believe he realized he was a type of Christ to come to mediate for all mankind.

God asks so little of us when you really stop and think about it. Basically God said; if you want to be counted in your own strength, pay a tax to the treasury of God so you are reminded that all you have is mine, all you are is mine and we are in this together.” A sacrifice has to have a cost, otherwise what is the purpose of going through the motions.

Just as David came to realize how he set Israel up for failure and the need for a sacrifice to cover the sins of Israel; let us examine our behavior in light of God’s word and determine each day to be a guide rather than a stumbling block as we interact with our friends and family. And thank the Good Lord above He didn’t hide His son from us, but offered HIM as the perfect sacrifice and the light to a darkened world.