How well do you know Jesus? I mean, really know him?

The Pharisees (the religious leaders who prided themselves on supposedly having mastered the Old Testament law) knew Jesus – and were plotting with the government leaders to find a way to kill this rebel.

The sick and the maimed and the hurting knew Jesus – and were flocking to his side in droves, anxious for their turn to be touched, recognized and healed by this miracle worker.

The evil, impure spirits knew Jesus – they knew they were powerless before the one they rightly recognized as the Son of God.

The 12 disciples knew Jesus – and they dropped what they were doing to follow him, sit at his feet, learn from him, and do the work this teacher sent them out to do.

His mother and brother knew him – or they thought they did. They thought he was out of his mind. They were so familiar with him, they missed who he really was and couldn’t comprehend his true mission from God.

The teachers of the law knew Jesus – and they were so upset and thrown off by him they accused him of being possessed by Beelzebub the prince of demons. It is easiest to accuse what we don’t understand or what we feel threatened by.

So, I ask again, how well do you know Jesus? I mean, really know him.

Thousands of years later and there are still many different ways people think they know Jesus and respond to him. Some are still so familiar with Jesus (they’ve grown up with Jesus all their lives) they have actually missed who he really is. Others see him as a threat to their way of life or popularity and have made him out to be the enemy, attacking him with vicious lies and accusations at every chance. Others, are sincerely working at being his disciples, spending time with him and doing the work he sends them out to do. Some still recognize Jesus as the healer, the one who can ease their pain and put the brokenness back together again. And, the evil spirits still know they are no match for the power of the Son of God. They may win a battle here and there, but the ultimate victory will go to Jesus Christ.

Do you know who Jesus is?

Does he know who you are? Will he tell his Father in heaven that you are his brother, sister or mother, because you are doing God’s will? 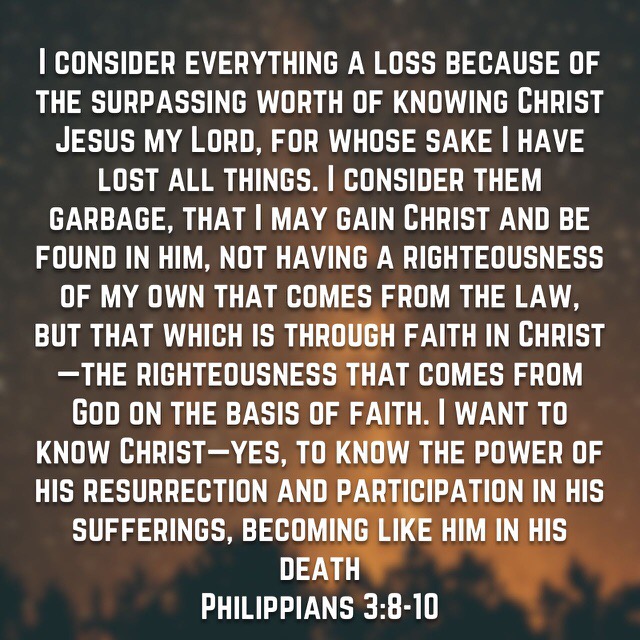 The last few days we’ve been talking about unity in the body. Today I want to spend some time discussing unity (or union) with the head of the body. Our connection with Jesus affects every relationship in our lives. If we are to achieve unity in our local church, we must maintain union with our Lord.

Union with Christ has two important aspects. The first is knowing him. This does not mean to know who he is or to know some things about him. It is to understand what he went through and why he endured it. It is to realize that without him we are hopeless. It means communicating with him. It means recognizing that our own efforts count as nothing towards our salvation and that only through him can we be saved and that this is a good thing. Paul says that everything he could boast about in himself is garbage compared to the worth of knowing Christ (Phil. 3:8), and in John 17:3 Jesus says that eternal life is to know the only true God and His son. Knowing Christ is essential for salvation and for being united with him.

The second aspect of our union with Christ is being like him. Earlier in Philippians, Paul tells readers to have the same mind as Christ (2:5).  Just as Jesus lived to serve the will of God, we should. Just as he was willing to give up his life for others, we should. He lived perfectly and we should strive to do the same. In Galatians 2:20 (ESV) Paul says, “I have been crucified with Christ. It is no longer I who live, but Christ who lives in me. And the life I now live in the flesh I live by faith in the Son of God, who loved me and gave himself for me.” Union with Christ is about emptying ourselves of the muck that comes from our sinful nature and replacing it with the holiness that comes from Christ—out with the old, in with the new.

In this life, we will never achieve perfect union with Jesus. We will not fully know him or be totally like him until we can be with him—without the presence of sin. Paul recognized this and writes that despite his shortcoming he would “press on toward the goal for the prize of the heavenly call of God in Christ Jesus” (Phil. 3:14, NRSV). We, too, should press on towards the goal to have union with Jesus. It won’t be perfect, but it will go a long way in furthering our own spiritual development and the unity of the Church.