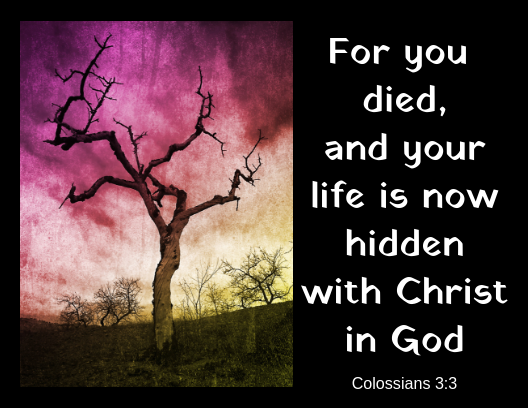 3 Since, then, you have been raised with Christ, set your hearts on things above, where Christ is, seated at the right hand of God. 2 Set your minds on things above, not on earthly things. 3 For you died, and your life is now hidden with Christ in God. 4 When Christ, who is your life, appears, then you also will appear with him in glory.

I wonder how those believers in Jesus understood those words when Paul first penned that letter to them. “you died, and your life is now hidden with Christ in God”. He told them that they died. What would it have meant to them to hear that they had died? Obviously they were still physically alive and breathing. They were not zombies or vampires or other popular dead, but not fully dead creatures. What part of them was dead.

Sometimes today we speak metaphorically about death. “I’m brain dead” means that I did something without thinking it through, it was silly or stupid. “I’m dead tired” means that I need some sleep.

I think that Paul was telling the believers in Christ at Colossi that when they were baptized into Jesus Christ, that part of their nature that was under the control of “the flesh” or their brokenness and alienation from God had died. Apart from Christ, that which drives us or controls us is sin living within us. When we come to Christ, that part that controls us is put to death. Our focus is no longer to satisfy our sinful desires. We live by the spirit of God, our life is now found in God. It has not yet been fully revealed. We are still living under the influence of sin, and the new nature has not yet been fully realized in our daily living. That process, known as sanctification, is ongoing. It requires, as Paul goes on to say, a daily putting to death of things like “immorality, evil desires, greed, rage, malice, slander”.

We’re baptized into Christ, then you died, and rose again. Your new nature has not yet been fully revealed and won’t be until the coming of Jesus, but as you live as a follower of Jesus in this present age, you die to your old self a little more each day as you live by the spirit of God in practical ways.