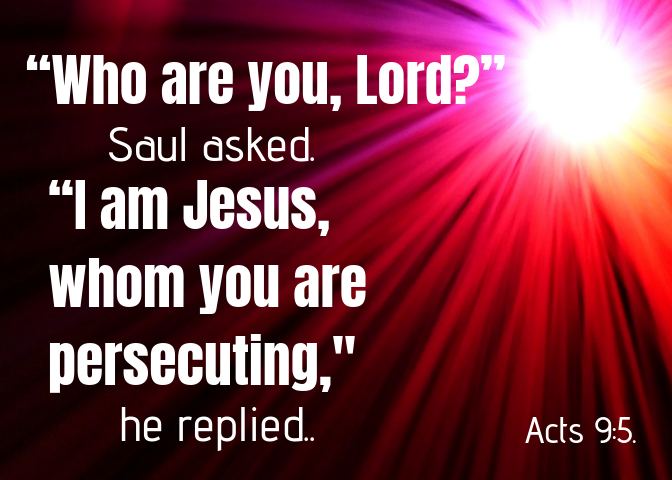 Much of what we believe in the Christian faith is taken, understandably, on faith. However, if I had to give one story that almost shuts down the need for faith and instead have PROOF about  Jesus and the Resurrection, it would be the story of Saul/Paul and his conversion in Acts 9.

Up until the point in Acts 9, Saul has been persecuting the Christian faith. They were most likely being stoned or thrown in prison for trumped up charges. Stephen was accused of blasphemy and he was stoned to death. We all know he spoke no words of blasphemy, because the truth is not blasphemous, but that is where the Jewish leaders were.

But in Acts 9, something amazing happens, Saul gets knocked off a horse, goes down, hears the voice of a man who claimed to be Jesus, goes blind, and wanders into Damascus blind and healed by a Christian, one of the very people who he had just been persecuting.

Why does this count as proof for me?

1. Because it’s clear that Paul is not crazy. In a day and age where scholars doubt everything from the historical Moses to the historical Jesus, one would assume that when they agree on a traditional understanding, that counts for something. No scholar doubts that Paul wrote Romans. Ask for yourself, is Romans the work of a man out of his mind with guilt, that turned to follow Christ because he was driven to the small band he once hated out of a plagued conscience? There are parts of certain letters where we see Paul’s expressed sorrow (1 Corinthians 15:9, for example), and one could point to that as a case. But Romans! It’s a theological magnum opus! He is a man still gifted with all his intellect and faculties.

2. Could Paul be lying, hoping to gain wealth or fame off this new movement? We will go into this kind of theory even more in depth tomorrow, but Paul lost everything by getting on board this Jesus movement. He was persecuted, beaten, battered, and abused (2 Corinthians 11), and this after he had everything he ever wanted. He was the top dog of Judaism (Philippians 3) but he turned away from all those things so that he may follow Christ.

I encourage you to consider the persecutor-turned-evangelist Paul. What could cause a man rabidly dedicated to defending the faith of his ancestor and the honor of his God to so drastically change his tune and agree with those whom he persecuted?

For my part, it convinces me there is something going on with this Jesus movement, particularly that the leader must still be alive.

So, do you believe Jesus is alive?