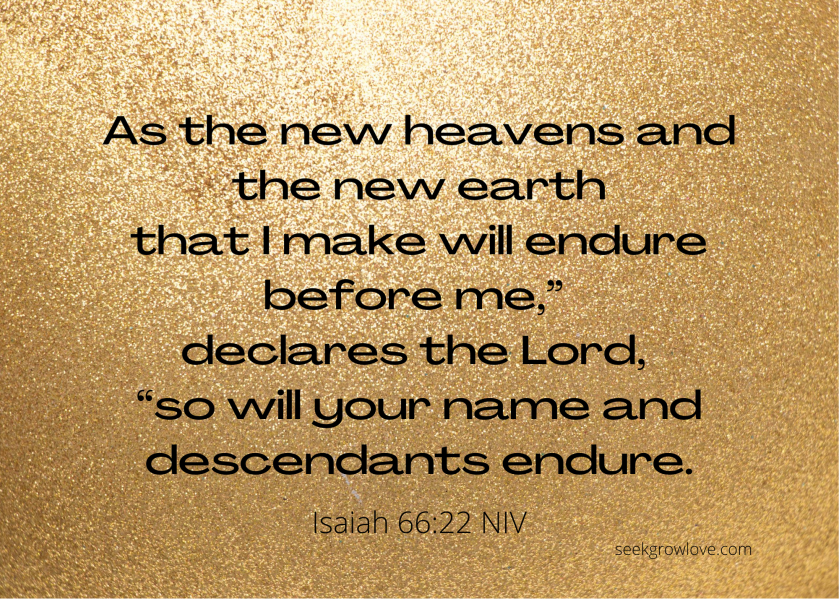 God called Jacob and He made the descendants of Jacob his Holy people. These are the ones who call on the name of the Lord. Yet today, there are those in Korea, China, Saudi Arabia, Kenya, Morocco, Malawi, Russia, Slovenia, Italy, Germany, France, America, Canada, Samoa, the Philippines and all over the world who know the name of the same God who called chose Jacob so many years ago. Even though they were his chosen people, God said, “Here I am, here I am” to a nation that was not called by his name (65:1). God has called Christians to the same promise that he called the Israelites. Indeed, He says “I have come to gather all nations and languages; they will come and see My glory…I will establish a sign among them, and I will send survivors from them to the nations…and the islands far away—who have not heard of My fame or seen My glory” (66:19).

Eight hundred years later, God sent a sign by the name of Jesus. Jesus himself performed sign after sign, from healing the blind (John 9) to raising the dead (John 11). The final sign was being raised from the dead himself, but this was different from the sign that he performed by raising Lazarus, for Lazarus returned to the grave. Jesus never returned to the grave; to make sure there could be no confusion, Jesus was taken up into the sky in the presence of his followers (Luke 24). The fact that Jesus was taken up is key here because it signifies his resurrection to something new, just as Isaiah prophesied that the world will be transformed into something new.

The closing words of Isaiah state that just as the new earth will endure, so will we. We will endure from new moon to new moon and from sabbath to sabbath. That is, we will continue living indefinitely. But the final verse takes a turn from the uplifting words that precede it; it promises destruction to God’s enemies, those who rebelled against him. It does leave you with a few questions though, what does it mean for their fire to never go out? It might point to an eternal suffering of those rebels as is believed by many Christians. I am not entirely sure, but asking questions that make you examine your own beliefs is important for growth. We must always be humble and accept that these prophecies are complex, and we may never fully understand them until the end has come.

Today’s Bible passage can be read or listened to at https://www.biblegateway.com/passage/?search=Isaiah+64-66&version=NIV