In Numbers 25, the Israelites are staying in the country of Moab. Because of intermarriage and lack of loyalty, they turn away from God and begin to worship Baal, a pagan god. Leading the way in this idolatry are several leaders of the people. God sends a terrible plague among the people that eventually killed 24,000 people and orders Moses to strike the idolatrous leaders down. So, Moses and Aaron’s great-grandson, Phinehas, gather the people together. The people are in mourning for the loved ones they lost in the plague, and all gathered together at the tabernacle, they are mourning in supposed repentance. However, Phinehas sees one of the Israelites blatantly bring a Moab woman into the tent of meeting! While the people are weeping in repentance, this person acts in a way that would indicate that he was not repentant at all. He was going to continue in his sin. The repentance was only caused by the negative experiences the Israelites faced, but it wasn’t true, heart-changing repentance that would cause them to change their actions.

Phinehas, in a zealous passion, takes a spear and kills both the man and the woman who are doing this. Because of that harsh measure, the plague stops and God promises the priesthood would continue with Phinehas for generations. This seems like a brutal action. But, the reason why God praised Phinehas for doing it was because this action shows (1) Phinehas understood the concept of the holiness of God and his tabernacle and (2) Phinehas recognized how sin has to be stopped so it won’t continue to do its damage. Sin spreads like a plague, which, once it gets started, is very difficult to eradicate. If we recognize the importance of holiness and trying ourselves to live a lifestyle of holiness, we cannot continue to allow sin to spread in our lives. We have to be willing to act zealously to snuff it out.

In Luke 3, we read about the ministry of John the Baptist in his own wilderness. He cries out to the people to ‘Repent, for the Kingdom of Heaven is near!’ He urges those who come out to see him to “produce fruits consistent with repentance” because “every tree that doesn’t produce good fruit will be cut down and thrown into the fire” (Luke 3:8-9). Recognition of the severity of sin and true repentance from that sin are crucial to producing good fruit. If we do not recognize and repent from sin, we will not produce good fruit. We will not live lives that glorify God.

Evaluate your life. Is it characterized by a right understanding of sin? Of an understanding of the importance of holiness? What about true repentance and good fruit? As John and Jesus said, “Repent! The Kingdom of Heaven is near!” 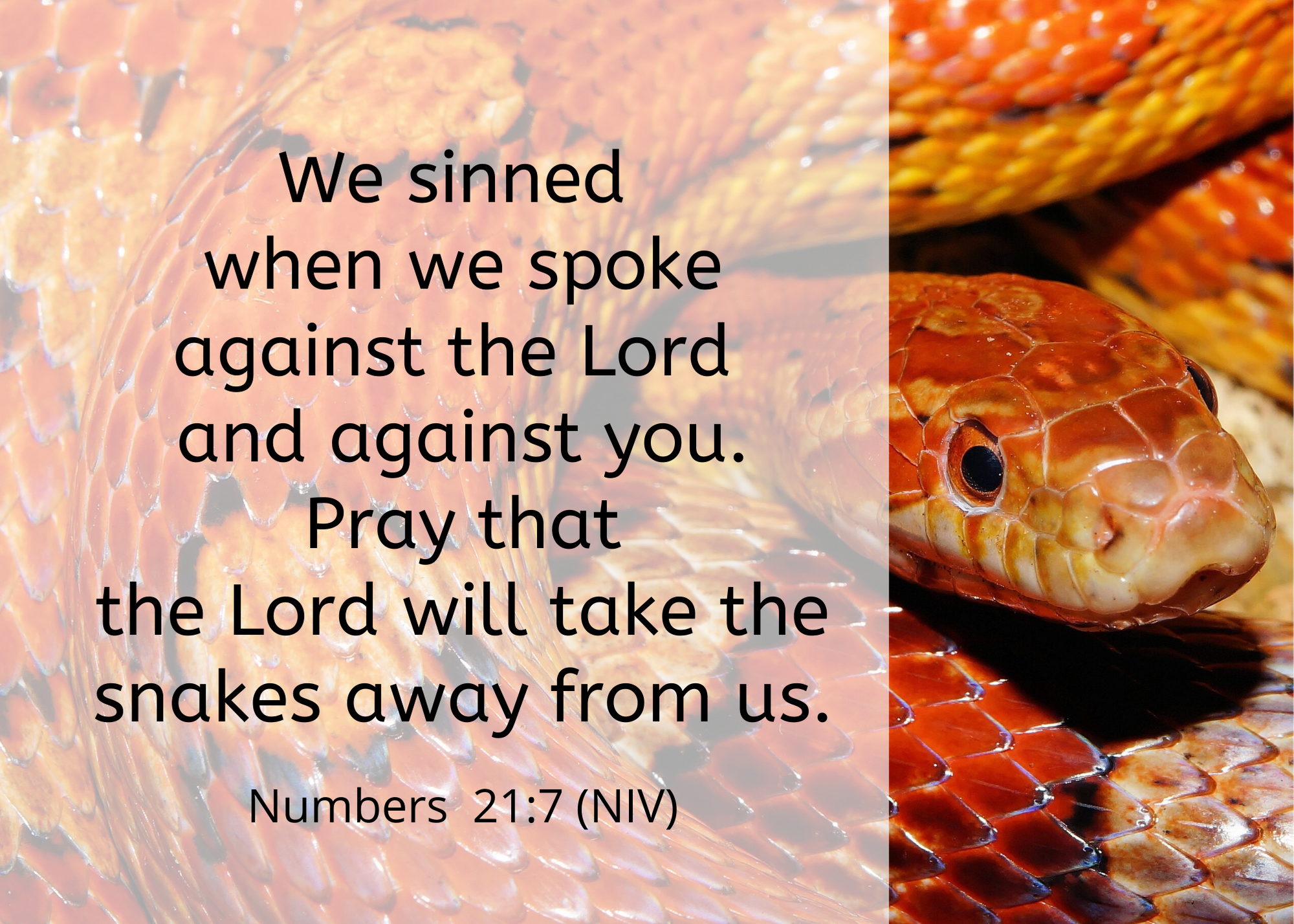 In today’s reading, the Israelites needed a spiritual “blood transfusion.” Their sinful and rebellious attitude had shown itself in impatience, complaints about hardships, ingratitude for manna, and a lack of faith in God’s leader, Moses. This faithlessness resulted in a deadly plague of snakes that were killing the people.
The Israelites repented and asked Moses to intercede for them. God’s response required them to show their repentance by a simple act of faith. Moses made a bronze serpent and lifted it up on a pole. To be healed, people had to look at the serpent. If they didn’t believe God’s words, they wouldn’t look up and would therefore die. Only through faith could they be saved.
Homeopathic medicine is the practice of curing likes with likes. The patient receives diluted doses of substances that, at full strength, cause the same symptoms the patient already has.
This type of medicine is used in many parts of the world, though it remains controversial among medical experts. In this instance, God prescribed a similar remedy for Israel, treating snake bites with a replica of a snake. Going a step further, God undid the effects of the plague through an image of the curse itself.
Today’s story begins with the people grumbling … again. It was the same old story: we’re dying, we’re starving, we don’t like the miraculous food, and we’re sorry we ever left Egypt. But this incident is unique; this time, the people repented.
In past events, Moses had asked God for mercy on behalf of the Israelites, but on this occasion, his prayers were prompted by a recognition of their sin that Israel hadn’t shown before. They realized on their own why the snakes were sent, and they confessed their sin. In that way, this was a spiritual breakthrough for Israel!
If God had followed the formula we’ve seen so far, we might expect Him to demand a sacrifice of some kind, like a lamb without defect. But the Lord told Moses to put a bronze snake, a picture of judgment, on a pole for all to see. He directed the people’s eyes, not to an image of purity, but to a symbol of wrath.
For healing to take place, the people had to close the loop of repentance. They sinned, confessed, and asked for mercy. The last step was to accept God’s remedy by faith and follow His instructions.
We often picture Christ as the perfect sacrifice, and that he is. But He also took upon Himself the shame of sin and the full penalty of wrath. In His conversation with Nicodemus, Jesus compared His upcoming crucifixion to the lifting up of the serpent in the desert. Let’s confess our sins, seek His mercy and turn our eyes to him, who not only gave his life but also received our punishment. Thank Him in word and in deed today.
Andy Cisneros
Today’s Bible passage can be read or listened to at https://www.biblegateway.com/passage/?search=Numbers+21-22&version=NIV
Tomorrow’s reading will be Numbers 23-25 as we continue the 2020 Chronological Bible Reading Plan